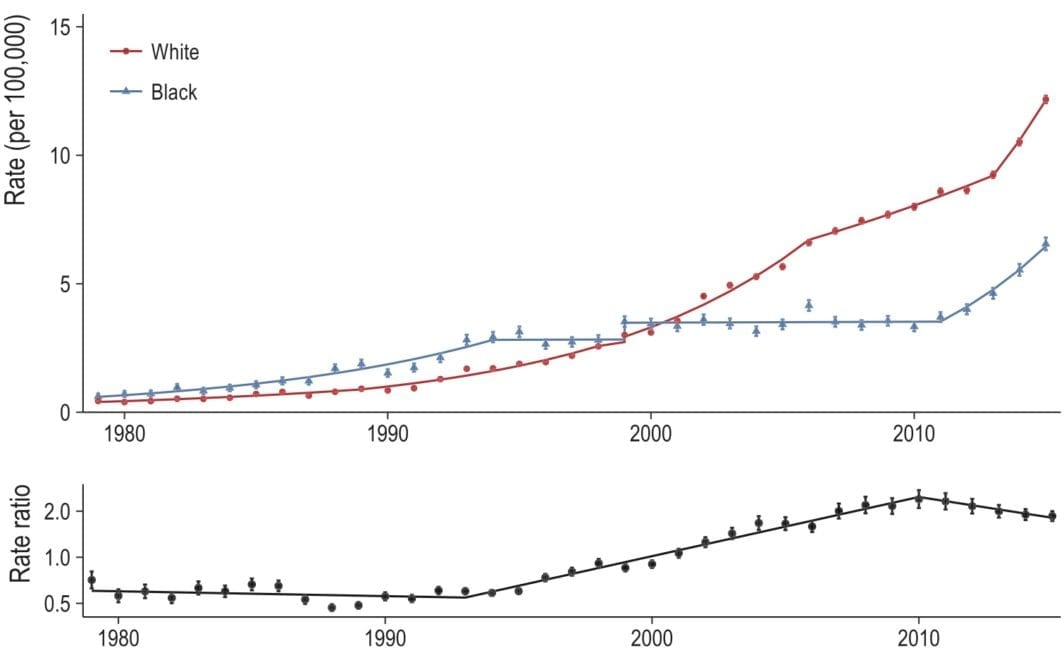 Our paper (with Monica Alexander and Magali Barbieri) is out now . Monica has a great, short Twitter thread on the findings so if you don’t want to read the whole thing, check that out. The publisher’s PDF is here.

After submitting our paper, the NCHS released the 2016 multiple cause of death files — so a couple months ago we were curious to see how (or if) our results would change when adding the 2016 data.

[NOTE (2/25/2019): Since this post, the 2017 data have also been released. I did a similar analysis comparing our original paper with the additional two years of data. See this post here or our Github repo.]

So before I get started, I should mention some important caveats:

Alright. So what did I do? I just took our 2015 results (the ones published in our paper) and projected the model out one year (to 2016). I then reran our entire pipeline to include the 2016 data. Now I’ll plot both lines next to each other: the 2015 model results are dashed and the 2016 model results are the solid line. Here is Figure 1, which plots the all opioid-related mortality rate, by race, for the black (blue) and white (red) populations from 1979 to 2016 (top) and the corresponding black/white rate ratio (bottom): 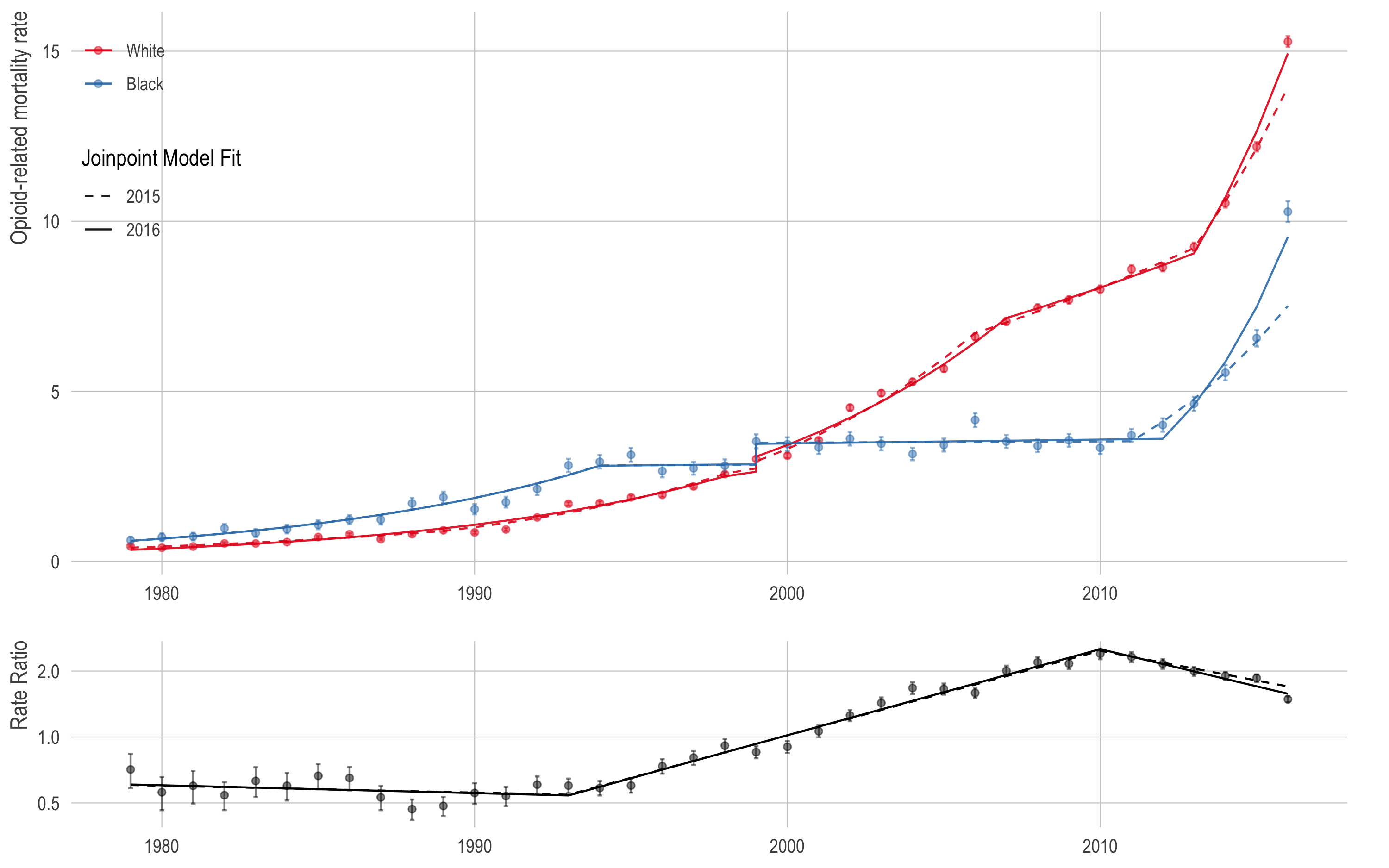 As the parallel increase in blacks and whites continues, the rate ratio is decreasing (in a bad way) slightly faster than the 2015 model indicated, but it’s close and unlikely to be statistically significant.

We’re going to skip Figure 2 because (as we can see above) joinpoint models are relatively robust in the early years if you’re just adding a small number of data points (relative to the total number of data points) at the end of your time series. All the code is available on our project Github if you feel inspired to generate the Figure 2 graph yourself.

Figure 3 breaks down the opioid mortality rate by the ICD-10 opioid type. Since the ICD-10 codes were not implemented until 1999, there are fewer years so our results will be more sensitive to adding data. As a reminder, these are not mutually exclusive categories so the rates will not add up to the overall rate. In addition, I removed methadone and unspecified opioid from this plot (even though they are in the published plot) because the models are largely the same. 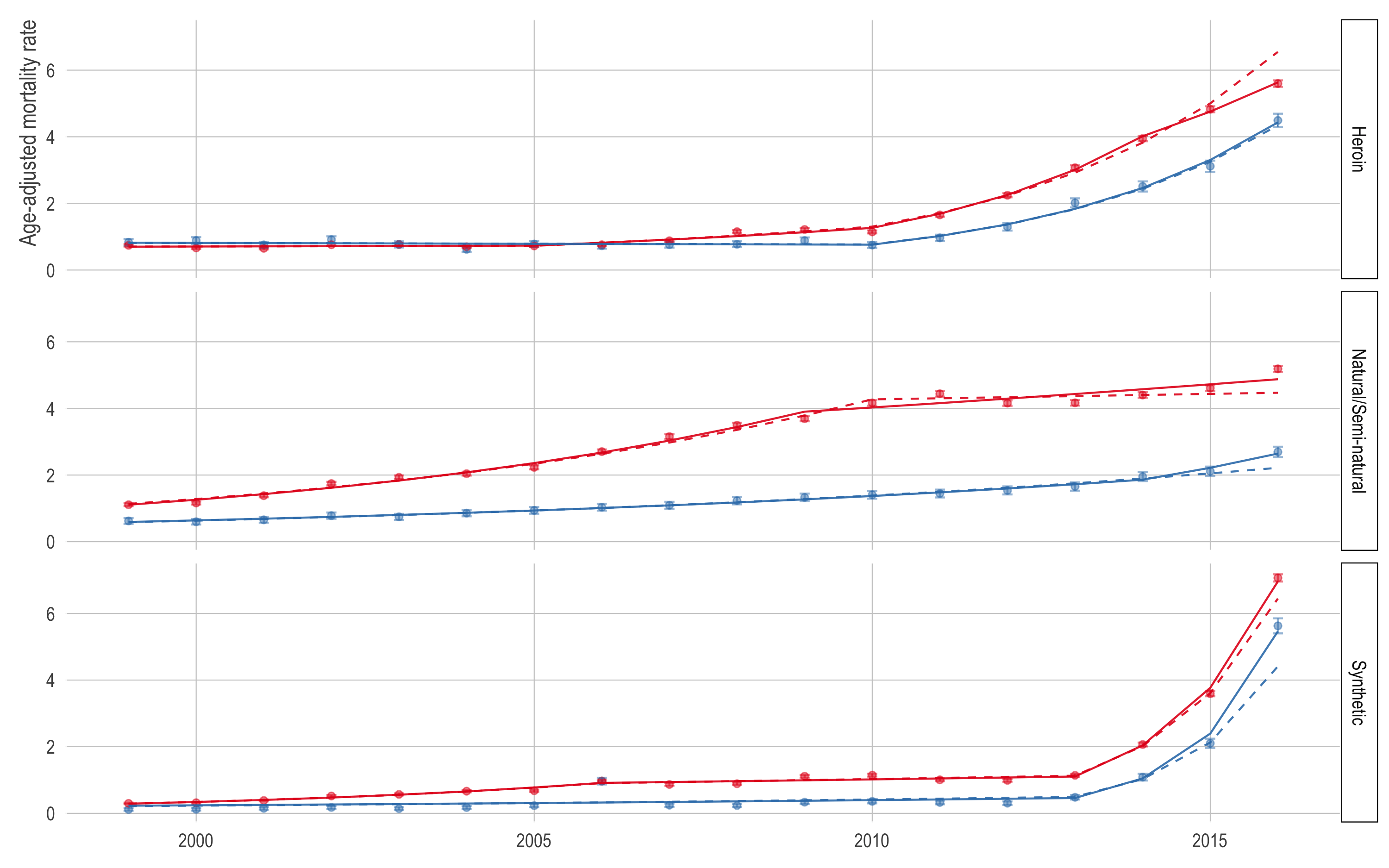 We’re continuing this work and looking at the interplay of geography and race in order to think about ways we can further investigate and potentially intervene in the epidemic at the subnational level. Check out our new Github repo, interactive results viewer, or better yet if you’re attending EPC 2018, check out Session 57!

All code for the re-analysis is up on our Github repo for this project.